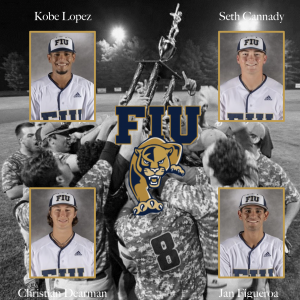 Waynesboro, Virginia
Florida International University will help fill the roster this summer by sending the maximum four players to Waynesboro. The Panthers finished the season at 23-32 and 12-18 in Conference USA. Two of the four players that FIU will send to Waynesboro are Valley League Champions with the New Market Rebels from just last summer. Kobe Lopez and Jan Figueroa were instrumental in the Rebels’ championship run, and will be key to the Generals success this summer as well. Seth Cannady and Christian Dearman will also make their way north from Miami. 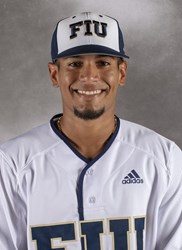 Kobe is the son of Arnaldo Lopez and Leida Gonzalez. The junior from Orlando, Florida and Archbishop McCarthy High School is listed at 5’4 and 152 pounds. While small in stature, Kobe can cause big problems for opposing teams. Last year in the Valley League, Kobe was named to the All-Star team and finished the season with a .307 batting average while playing the majority of his time at second base for the Rebs. While he’s struggled a bit at FIU, Kobe is revered for his work ethic, attitude, and love for the game and it payed off last summer. While it can be tough to keep players all the way through the playoffs in summer ball, Kobe was a big part in winning the championship as he drove in 4 runs from the leadoff spot. Welcome to Waynesboro, Kobe Lopez! 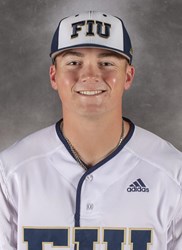 Seth is the son of Craig and Tanya Cannady. The sophomore from Sebring, Florida and Sebring High School is listed at 6’2, 201 pounds. While Seth is an extremely capable ball player, he’s also extremely studious. He graduated high school with a 4.32 GPA and was named to the C-USA Commissioner’s Honor Roll in 2018. As for his baseball side, Seth had an immediate impact in his freshman campaign. He played in 42 games and hit .200 with three doubles and nine runs driven in. This season, Seth took a bit of a step back this season. He played in 31 games and made 15 starts. He picked up his first collegiate home run this season and drove in 11 runs. While he had a lower batting average, Seth still worked his way on base at a decent clip. His on-base percentage was at .311, which was about .150 points higher than his average. Seth will be looking to improve this summer and will play a strong defensive outfield. 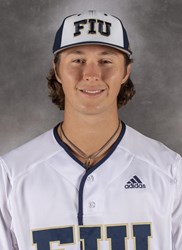 Christian is the son of Bill and Lilli Dearman. The junior from Pembroke Pines, Florida and West Broward High School is listed at 6’0 and 195 pounds. Christian just finished up his first season with the Panthers after transferring from Tallahassee Community College. He was one of the top guys out of the bullpen for FIU. He made 20 appearances on the season, all out of the bullpen. He was 2-1 with a 3.91 ERA. Christian is a strike-thrower. He only walked 8 people in a little over 25 innings. Over that time he struck out 15 batters and gave up just 11 earned runs. We look forward to Christian making his way to Waynesboro this summer!

Jan is the son of Ruben Figueroa and Magda Francisco. He’s a native of Trujillo Alto, Puerto Rico. The sophomore was a member of the Valley League Champion New Market Rebels last summer. While his numbers look rough on the surface, he showed spirts last summer of dominance. After the summer, Jan figured some things out for the Panthers this season. He picked up 5 saves with a 4.03 ERA over 22.1 innings pitched. This year was a nice step up for Jan after a freshman year that saw him pitch in nine games with a 4.50 ERA. Jan will look to continue his momentum into this summer. Welcome to the Generals, Jan Figueroa!