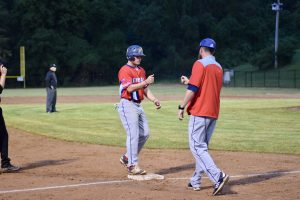 After some early offensive struggles, the Gens pushed across 3 huge runs in the 5th inning to take the lead for good in their Opening Night win over Covington.

The Lumberjacks wasted little time getting on the scoreboard. After Waynesboro starter Deven Judy (Gannon University) walked 2 out of his first 3 hitters, Matthew Cocciadiferro drilled a single to right field to bring Pedro Nazario in to score. The lead for the Jacks was at 1-0 after one inning.

Both pitchers had the strikeout pitch working early on. Kristopher Davidson for Covington had six strikeouts in his first four innings, while Judy also struck out six in four innings.

The score stayed the same until the bottom of the 5th. After the first batter of the inning was retired, Jackson Tate (U of Alabama) singled to start things out. After Jackson Greene (Florida St.) was hit by a pitch and Kobe Lopez (Florida International) walked, Nick Neville (South Carolina) hit a bases loaded, two RBI single to left field. On the very next pitch, Joe Kinker (Florida Gulf Coast) singled to right center to drive in Kobe Lopez. The score after 5 complete innings read Waynesboro on top, 3-1.

That’s all reliever Zach Blankenship (Valdosta State) would need. He fired three innings, gave up an unearned run and struck out two to pick up his first win of the season.

The offense would continue to shine in the 6th. Elijah Quiceno (Gannon University) would hit a one-out single to right field. After moving to second on a wild pitch, Quiceno would be brought in to score on a double by Jackson Tate.

Needing an answer, the Lumberjacks would score an unearned run to pull the score back to 4-2. Jeff Taylor tapped a ball back to Blankenship on the mound, who airmailed first base and allowed Taylor to move into second base. Pedro Nazario would then single to center to drive in Taylor.

Unfortunately for Jacks fans, the General offense would continue to tack on runs in the bottom half of the 7th. After Joe Kinker walked to lead off the inning and moved to second on a ground out, Elijah Quiceno would come up with a 2-out single to score Kinker. That brought the score to 5-2 after seven complete innings.

McLain Harris (Young Harris College) would then come in and shut the door with a six out save. Four of the six outs he recorded were via the punch out.

Head Coach Zac Cole and his team will be back in action tomorrow night on the road vs. Harrisonburg.