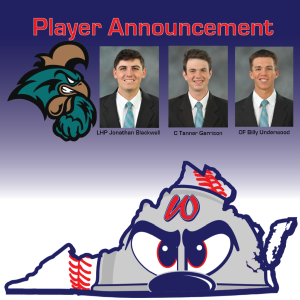 Underwood comes to Waynesboro after two years in the Coastal Carolina program. During his freshman year in 2021 the St. Louis, Missouri native finished third on the team in batting average (.280). Underwood adds versatility as he has seen action in the outfield as well as at first base during his time as a Chanticleer.

Garrison comes to Waynesboro off of his best season so far at Coastal Carolina. The junior has a current .273 batting average which is the highest of his career. He is also tied with his career-high of three home runs.

Blackwell comes to the Shenandoah Valley looking to add to the Generals bullpen. From nearby Charleston, West Virginia, he comes off of a season only throwing three complete innings so far all out of the bullpen recording a season-high two strikeouts against Texas State on Apr. 8.