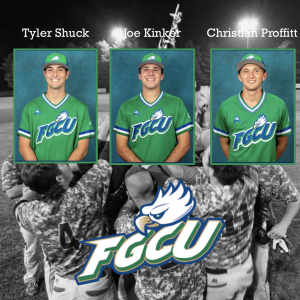 Waynesboro, Virginia
Florida Gulf Coast University will send three players that were key in their success this past season. The Eagles were 34-21 this season but unfortunately were two and done in their conference tournament. FGCU has sent some of their top players to Waynesboro before. The one that comes to mind is Alex Brait last summer. This season is no different because the Eagles are sending Tyler Shuck, Joe Kinker, and Christian Proffitt. 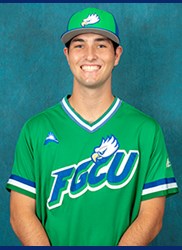 Tyler is the son of Kirsten and Bill Shuck. The 6’3 210 pound righty from Cape Coral, Florida and Canterbury High School will be a junior next season. Tyler was the team leader in wins for the Eagles this season as he compiled a 7-1 record over his 52 innings of work. Over that time, he brought home a 4.01 ERA and made a save. In the 52 innings, he allowed just 49 hits and 23 earned runs while striking out 38 batters. While Tyler has played some time in the field in his collegiate career, he’ll most likely spend all his time on the mound this summer. Welcome to Waynesboro, Tyler Shuck! 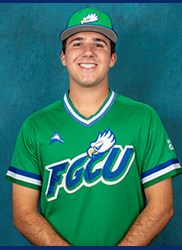 Joe is the son of Jennifer and Joe Kinker. Joe is listed as a 6’1 220 pound freshman utility player from Northport, Florida and Venice High School. Joe is very comparable to former Gen Alex Brait. Both hit for good average, good pop, and could play multiple positions. Brait played catcher, first base, left field and right field for the Generals last summer. Joe will play both first and third base as well as the corner outfield spots for the Gens this summer. For the Eagles this spring, Joe hit .324 with 58 hits, 9 doubles, and 7 home runs with 40 RBI. He also is very disciplined at the plate as he walked 42 times this season. That helped him to a strong on-base percentage of .461. We look forward to watching Joe this summer. Welcome to Waynesboro, Joe Kinker! 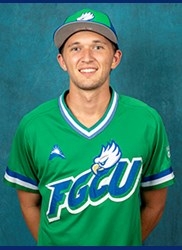 Christian is the son of Patricia and Christopher Proffitt. He, like Tyler Shuck, is from Cape Coral, Florida, but Christian is from Ida Baker High School. He’s listed as a 6’0 155 pound sophomore middle infielder. While Proffitt struggled a bit this spring, he’s shown he can be a huge impact for a team. He was named as the Freshman of the Year in the ASUN conference after his freshman campaign. He hit .284 last year with 25 RBI that year to bring home the award. This season he played in 47 games for the Eagles. His numbers dipped a bit, but Christian is fired up and ready to roll this summer for the Gens. He will look to get back to his freshman year ways. Welcome to Waynesboro, Christian Proffitt!