Holem Announced as Head Coach for 2023 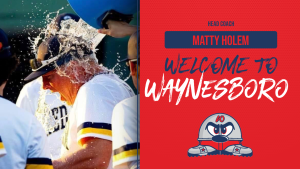 WAYNESBORO, Va. – Matty Holem was named the head coach of the Waynesboro Generals for the 2023 summer season, the club announced officially on Monday.

Holem joins the Generals after spending this past summer with the Red River Pilots in the Expedition Baseball League in Grand Forks, N.D. He picked up his 200th career win as a manager in collegiate summer baseball with the Pilots.

“I am really excited about the opportunity to lead the Generals in 2023,” said Holem. “The Generals and the Valley League have been around for a long time and have a great reputation. I look forward to getting this going in June.”

“Coach Holem has already started to prove his investment in the Waynesboro community,” said team president and co-owner Kathleen Kellet-Ward. “It brings new excitement every time we have new energy coming on board.”

Holem currently resides in Virginia Beach, Va. with his fiancé Jackie who is currently serving in the United States Navy.