Pair of Gamecocks Headed to Waynesboro 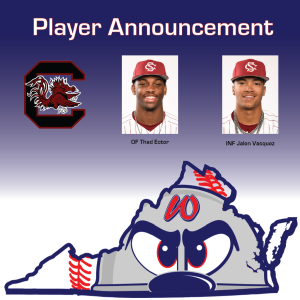 Thad Ector and Jalen Vasquez will be joining the Generals for the 2022 campaign from the University of South Carolina. The Generals will open the season on June 3 at 7 p.m. as they host the Staunton Braves.

A pair of Gamecocks are headed to Waynesboro for 2022. INF Jalen Vasquez and OF Thad Ector will make the trip to the Shenandoah Valley for the summer from the University of South Carolina.

Vasquez comes to the Generals off of his second season in the SEC. The North Charleston, South Carolina native has seen action in 28 contests for the Gamecocks this spring in clueing six starts. At the plate, Vasquez has a .233 batting average and five RBIs. An All-SEC academic selection in 2021, Vasquez has also seen action on the mound this season appearing in four contests.

Ector will make the trip to Waynesboro following his freshman season for the Gamecocks. In 17 games Ector has tallied an RBI and three stolen bases and has yet to be caught on the basepaths in 2022. The Tyrone, Georgia native was the top-ranked outfielder according to Perfect Game in the peach state in the class of 2021.

The Gamecocks sit at an even 27-27 so far in 2022 but have series wins over ranked opponents such as Texas and Vanderbilt. They will begin SEC tournament play next week.

The 2022 Generals season will get underway on June 3 as the Staunton Braves come to town for a 7 p.m. matchup.