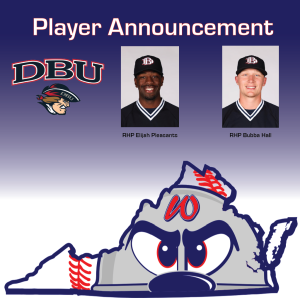 Two Dallas Baptist pitchers are headed to Waynesboro for 2022. Elijah Pleasants and Bubba Hall will make the trip to the valley.

This season, two right-handed arms will be joining the Generals from Dallas Baptist University. Bubba Hall and Elijah Pleasants will make the trip to Waynesboro for the summer.

Hall is coming off of his first season in Dallas after transferring from Southern Illinois University. During his 2022 season for DBU, Hall has tallied a 3-2 record in 24 appearances all out of the bullpen. Hitters have not faired well against the Hurley, Mississippi native as they are hitting .184 against him.

Much like Hall, Pleasants is coming off of his first season or DBU after transferring from Tennessee. The Clarksville, Tennessee native has seen action in seven contests including one start. Pleasants has received some MLB attention during and prior to his collegiate career as he was a 36th round selection by the Kansas City Royals in 2018 and also played in the MLB Draft League last summer.

Dallas Baptist currently sits with a 33-20-1 record and is set to begin play in the Missouri Valley Conference tournament this weekend. The Patriots were MVC Champions in 2021 for the fourth time in program history.

The Generals season gets underway on June 3 as the Staunton Braves visit. Start time is set for 7 p.m.