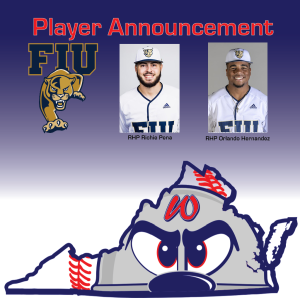 Richie Pena and Orlando Hernandez will join the Waynesboro Generals for the 2022 campaign. The 2022 season will begin on June 3 as the Braves come to town for a 7 p.m. matchup.

Two pitchers from FIU will be joining the Generals for the 2022 campaign. Richie Peña and Orlando Hernandez will be making the trip from University Park to Waynesboro this summer.

Peña joins the Gens coming off his second season with the Panthers. The Coral Springs, Florida native, has seen action in 14 games including one start. Peña has tallied a 1-3 record including a save against Seton Hall in March.

Hernandez comes to the Valley after his second season for the Panthers as well. In 11 appearances Hernandez has tossed just north of 20 innings including a win over St. Thomas in his first outing of the season. Both Hernandez’s father and uncle have a World Series championship on their résumé.

The Generals will kick off the 2022 season with a home matchup against the Staunton Braves on June 3. First pitch is set for 7 p.m.