Gens Get Back In Win Column 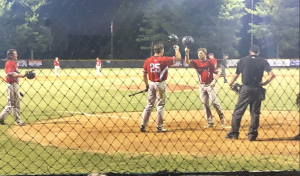 A two-run home run in the bottom of the seventh by Jackson Tate put the Generals ahead for good on Monday night in a makeup game with the Harrisonburg Turks.

The Turks jumped out to an early lead in the game with two runs in the first inning. All the offense in the first came with two outs in the inning. Cole McNamee singled and Caston Peter was hit by a pitch to put runners at first and second. Aaron Levy drilled one into left center for a double that scored the first run of the game. The next batter was Jack Roberts who singled up the middle for the second run of the inning. The Gens would sniff out a play that Roberts would steal second, but once the throw was made by the catcher, he stopped in his tracks. Once the throw was made, the runner from third tries to steal home. Fortunately for the Generals, Kobe Lopez (Florida International) delivered a strike to the catcher and the runner was caught stealing at the plate for out number three.

The Generals weren’t able to respond in the bottom of the first, but in the bottom of the second they made up for it with three runs to take the lead after two innings of play. Jack Murphy (St. Mary’s) started the inning with a double over the left fielder’s head. Two batters later, Bryson Worrell (East Carolina) worked his way on with a walk to put runners at first and second. After a strikeout, Connor Norby (East Carolina) bounced a single up the middle to bring in the first run of the game for the Generals. When Worrell tried going from first to third on the hit, the throw got away from the third baseman to allow Connor Norby to scoot into second base. Two runners were now in scoring position for Kobe Lopez. Kobe came up big with a double that was scorched into the left center field gap. Both runs would score and the Gens had the lead.

The Turks would tie things back up with a run in the fourth inning. The run was an unfortunate one for the Gens. The inning started with a routine ground ball that was fielded cleanly at third by Connor Norby. When Norby made the throw across, it was going to be on target, but the ball was right in the sun for the first baseman Wes Clarke (South Carolina). When the ball skipped away, Immanuel Wilder was able to reach second base. Wilder then stole third to put himself just 90 feet away with nobody out in the inning. After a strikeout, the Turks came up with an RBI groundout to short by Nick Zona. The score was tied at 3 going into the bottom of the fourth.

The Generals took the lead right back in the bottom of the fourth. Bryson Worrell came up after the first out was made, and in a 2-2 count, he hammered a no-doubter to right field for his third home run of the summer. Bryson showed exactly why the Gens chose him to be our representative in the home run derby on Sunday in Harrisonburg for All-Star weekend. The Gens led 4-3 after four complete innings.

The Turks didn’t let the lead last very long. They tied the game up in the top of the fifth. Caston Peter led things off with a walk. He moved to second on a wild pitch, then to third on a ground ball to the right side. Jack Roberts, who had just given up the home run after coming into pitch in the last half inning, made amends with an RBI single up the middle. This tied the game and Roberts got himself off the hook for the loss.

After a few innings of not scoring, the Generals broke the tie in the bottom of the seventh in a big way. After Jack Murphy was hit by a pitch with one out in the inning, Jackson Tate (Alabama) was quickly in an 0-2 hole. He said in his post game interview that after a curveball in the dirt got away and allowed Murphy to go to second that the next pitch had to be a fastball. He was right. He took the elevated fastball deep to left center for his third home run of the summer to give the Generals the lead 6-4 after seven innings.

That put the pitcher of record, Christian Dearman (Florida International) in a spot for his second win of the season. Dearman was lights out once again. He threw three innings, allowing just two hits, no runs, walking one, and striking out three. After working the sixth, seventh, and eighth, he turned the ball over to McLain Harris (Young Harris College) for the save opportunity. McLain, as he has been all year, was shut down once again. He allowed a hit and a walk to get the go-ahead run to the plate, but to home fans, the game never really seemed in doubt. Harris was able to strike out two batters in the ninth to pick up his second save of the season.

The Generals (16-8) are back in action on the road in Covington. They take on the Lumberjacks on Tuesday in a double header consisting of two seven inning games. After the win over South division foe Harrisonburg, the Generals have a good opportunity to put some space between themselves and Covington to lengthen their lead on the rest of the division. First pitch of the first game set for 5 pm with the second game starting approximately 30-45 minutes after the completion of game one.